Still down at Oily Hall but things are happening....

Wild Camping Toilet, a new pond and the cows are back on Oily Hall

As usual there is much to do.... but we have got some things done. The Wild Campsite is still coming along, Jason has started to dig a new pond and the cows from Spinney Abbey are back on Oily Hall.

This is where we are up to. The toilet has walls, a door and half of a roof. It does not yet have a toilet! Earth on the roof, a door handle or lock, shutters, or the base chicken wired in. It does look a bit like a bird hide, but the idea is the toilet can be moved from one end to the other in a few years and the extra space allows for wheelchair acess. The windows are high up so that one can be opened to let light in when it is in use. 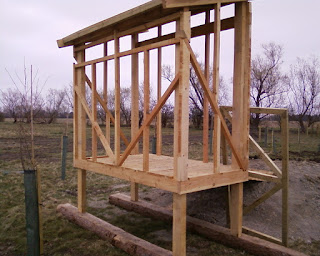 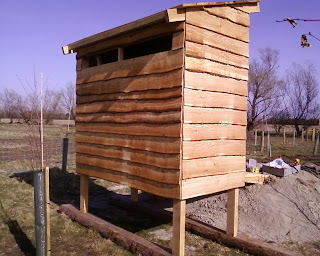 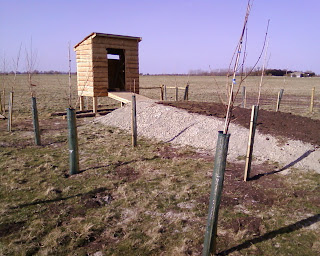 Here is the beginings of a pond. It isn't going to be deep, 2m in the middle. Depending on the clay found it might need to be puddled to ensure it holds water. Puddling is the process of spreading clay over porous layers such as sand. It can be a slow process if you have to hunt for the clay. So far the clay has been where we expected it, but we will see what tomorrow holds. The overburden is moved to the side before being spread out later on. 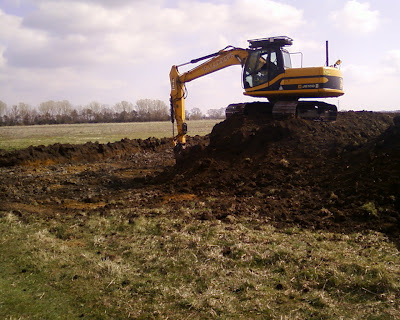 On a side note we did see, or think we might have seen, a strange/rare thing, a black fox. We were pretty sure it wasn’t a dog but it was quite large, sadly we couldn’t get a good picture. Black Foxes are ridiculously rare by the sounds of it so we will wait to see if we can see it again. Other than that the Marsh Harriers were overhead again and flew quite close, this time we did get a picture but it was hardly Richared Nicoll standards mind. Always worth checking out his website http://www.richardnicollphotography.co.uk/ 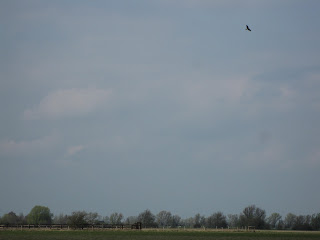