The cows are leaving and the new locks are going out

The cows are due to be coming off Tubney Fen and Burwell Fen this week. As part of our environmental stewardship agreements the cows are removed over the winter and will come back in the spring. I will try to get the small gates removed to allow for easier access but this might take a bit of time I’m sorry to say. We have a busy two weeks on the Sedge Fen coming up. As I have a chipper and chainsaw licence I am booked to help with the large amount of tree work due to be carried out.

I'm delighted to say there have been some good sightings of Short Eared Owls on Burwell Fen. I was down there at about 4pm this afternoon and met a few people who had popped down to have a look. They reported seeing between four and six birds yesterday and we saw one close overhead. Barn Owls are also present in the area as well as Little Owls and Harriers. If you do fancy heading down to have a look please try not to disturb the barn. For the enjoyment of all please respect the birds and the other bird watchers.

Where is it? It can be easily found on Google Maps by typing 'Newnham Drove Burwell'. Scroll a across to the left and you can see the barn. The bridge is at the end of Hightown Drove but is accessed via Split drove to the South of Reach Lode (take note though as Factory Drove is for some reason called Little Fen Drove on the map). Newnham Drove can be driven down but is in a bad state and to be honest I would avoid it. I have taken my car down there and there were a few bumps scrapes on the way! But don't be put off as it is well worth the trip.

Hurray, the picnic benches are back

We have one new extra bench with two others having been replaced. Feel free to hunt them out and have a nice rest or a picnic. To make the hunting a bit easier, two are on the Lodes Way next to Reach Lode bridge and one is behind the Bird Hide at Tubney Fen. Thanks to Lois for helping to get them concreted in. If you are out enjoying the Lodes Way Walk this weekend may they be a welcome break along the way. 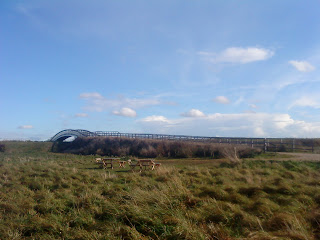 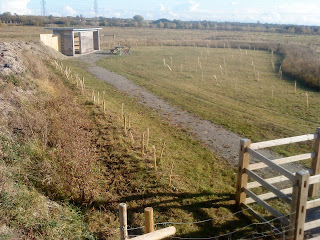 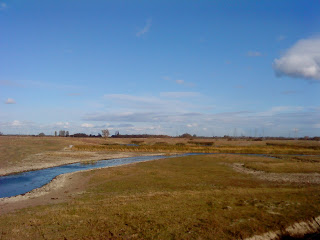 Well we are getting there, the plans are coming together (I love it when a plan comes together). But it isn’t as simple as it seems, you can't just whack a fence up any old how. A culvert was put in and another one enlarged, two other fences needed were re-situated, cattle grids put in place, bollard placement and so on. But as I say, it's almost ready. Further to this in the next few weeks we are hoping to get some test holes dug in preparation to dig some ponds during the winter.

The bollards are in, finally, but the gates are still there. So you can now cycle, walk and horse ride through unhindered. Hopefully the gates will be removed by Jason, our main contractor, over the next week when he gets a moment from carrying out the slubbing on the Sedge Fen. Also, on a disappointing note, the omega sigh was stolen. It will take a few weeks to get it made sent out and fitted again. They never seem to make two of them alike and the bolts can be a right pain as they go up all wonkey. Something to look forward to there.

Anyhow here is where we are currently: 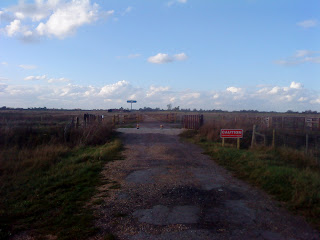 The plan for tomorrow is to get some picnic benches out and carve some pumpkins for the Halloween event on the fen Saturday.

Getting things strimmed, mowed, and neat for the winter

A story of three strimmers, a lawnmower, and a tractor

We had a good go at getting the place tidied up, mowing the path edges and strimming pretty much all the access points and picnic areas. I think we might have a bit more of a clear out of the barrier ditch at the Hurdle Hall area but in the main things are looking much improved. Sadly there is a fair bit of litter knocking about, I think that a full day of hunting the stuff down is probably the best way to get back on top of this again.

Sadly there have been a few fly tips recently. Mark Mehaffey from East Cambs CC has been fantastic and working with enforcement he has reduced the amount of dumping over the past few years, unfortunately though a few have popped back up.

On a bright and slightly fence related note here is a 'before and after' picture of one of the gates we refurbished this summer: 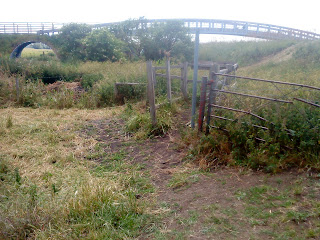 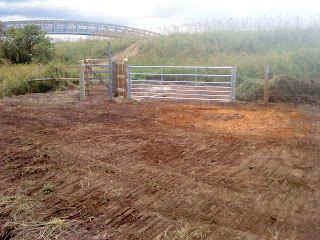 Some bollards are out & we go for a walk

I've fixed the sign up, the bollards are in, and the new locks are on. It is all looking good and I do hope they do their job. In preparation for the installation of the low bollards for Newnham Grove I have put in place warning signs as shown in the photos below. I also put in place the bollards on the access points from Hightown Drove to the Lodes way. 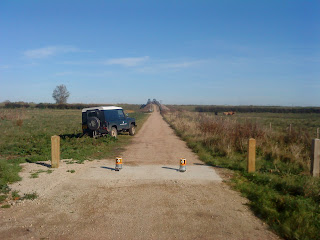 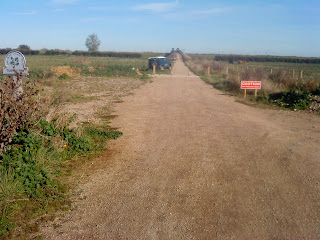 To promote the walking festival and to enjoy it for ourselves we took a small bimble to Ely. The small matter of the 6.5 miles did however leave me in a small amount of pain and somewhat relieved to be cheating and getting a lift back. This was, I should point out, more to allow me to get on with my work, and in the afternoon and I did get some much needed things done. The more hardy of the group did however tap their heels and after handing out information leaflets and a healthy lunch were able to head back to Wicken with a spring in their step.

If you want to get involved then check out the following link. The second page has the info on it: 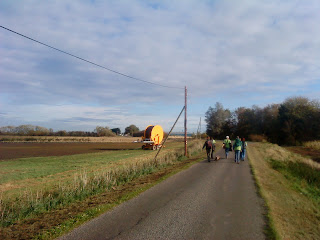 Have a lovely weekend.

I have been working on the security at the access points to the Lodes Way and the various points of entry used by our tenant farmers and staff. This process began with a review of what was in place about a year ago. We were the victims of several thefts last winter including some of our bollards and even the locks themselves! This was in fact the second time we had a load of locks pinched. In total we lost: one small gate, two 8ft gates, three 10ft gates, an oak bench and two picnic benches. They angle grinded the metal anchors fixing the picnic benches to concrete in the ground. As a result we were left with a mess that has taken quite a while to get near to being fixed.

Why did it take so long to fix?

Well it took a while because; firstly, we didn’t want to stick all the stuff back out just to lose it again. Secondly, we had to work out a plan of action and prioritise what to fix first. Keeping the livestock in the fields when they were back was at the top of the list. Thirdly, we had to work out if the plans were really good enough and accpetable for use. Finally, the groundwork needed to be done and the parts modified and installed.

What are we doing about it?

Several things. Mike Overall, our blacksmith, made us two branding irons. We now mark all of our new furniture in this way with it being much faster and neater than routing logos or initials into the wood. We have also modified and improved the anchors for the picnic benches. All the locks have also been upgraded and we have worked with Halls of Cambridge to change the way we allow access to our locks. Changes have been made to a selection of the bollards with new designs allowing tractors drive straight over as well as access to horse and carts whilst stoping other vehicular access.

When is it going to be finished?

Well let’s not go promising the world after the most recent delay when the signs weren’t quite right. I now have the bollards finished, with the concrete pads having been put in place. The locks are now in, however, the paperwork for giving them out to our tenants and contractors isn’t yet completed, and the warning signs are ready to be put up. This will all be in place by the end of next week allowing us to set to the tasks of removing the gates from Newnham Drove and some old concrete blocks.

Here are the new bollards: 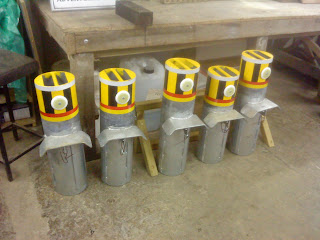